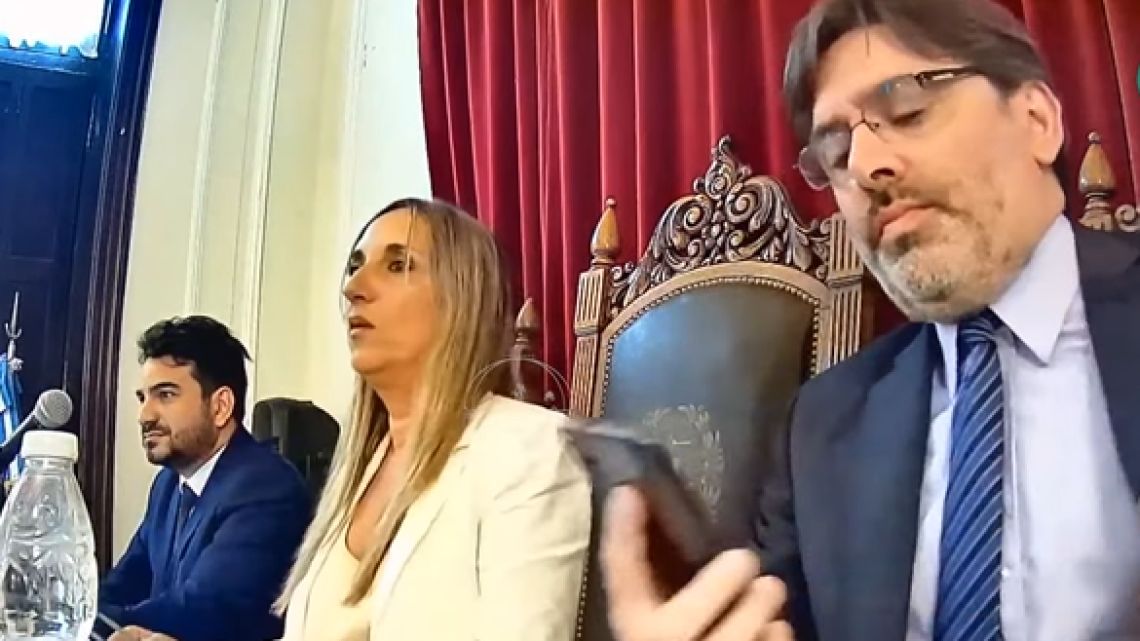 “Defendants, I let you know that you must be attentive and everything that happens in the course of the debate because your procedural situation is going to be resolved here. I also let you know that have the right to make a statementwithout it being able to be used against him”. The sentence was pronounced by the judge maria claudia castro on January 2, at the beginning of the trial for the crime of Fernando Baez Sosa.

Accompanied by two men, the Vice President of the Court christian rabayaand the vowel emilio lazari, the magistrate looked at the defendants: Máximo Thomsen, Ciro Pertossi, Enzo Comelli, Matías Franco Benicelli, Blas Cinalli, Ayrton Michael Viollaz, Lucas Pertossi and Luciano Pertossi. She made them aware of their rights and introduced them to the parties, in addition to warning them that if they chose to testify throughout the process they could be “subject to questions that the opposing party may ask.”

That day is behind us and the final stage of the trial is about to start. After the testimonials, the complaint, the defense and the Prosecutor’s Office will have the opportunity to present their allegations between January 25 and 26. These will be two key days for this Buenos Aires Court that will lateror will you have to define if the eight defendants are convicted and what sentence fits them for his responsibility in the murder that occurred on January 18, 2020 in villa gesell.

Fernando Báez Sosa: how the trial will continue after the closing of the testimony stage

The three judges have extensive careers in Justice. Castro, president of the Tribunal, a position she assumed in 2013, is known for the intervention she had during the Case Heads. It’s that she was the judge’s secretary Juan Jose Macchi and shortly after, with the beginning of the first trial for the murder of the photojournalist of the News Magazinehe became an investigating prosecutor and joined the team of prosecutors prosecuting the trial.

“Personally, it meant an accelerated career in everything that is criminal procedure (…). He marked the three prosecutors who intervened. The work had to be organized and systematized in a very short time (…). I think the three of us feel proud to have been able to face it”, recorded the judge in an interview with The AR Journal.

Báez Sosa crime: who is Ayrton Viollaz and why could they ask for his acquittal

Owner of a strict low profile, the judicial official is a native of Azul and studied Law at the National University of La Plata, to later develop most of her career in pains. It is in charge of the Trial Court of a Buenos Aires town like any other, but it has a strategic logic from the judicial dimension: it has jurisdiction in cases that occurred in more than a dozen parties, including those of the Coast as General Madariaga, Partido de La Costa, Pinamar and Villa Gesell.

As said before, the magistrate is accompanied by the judge Christian Ariel Rabaia, who despite being the newest (he arrived in 2019) is vice president of the Court. He had previously had a stint at the Public Prosecutor’s Office and Castro and the prosecutor were present at his swearing-in ceremony Juan Manuel Davilawhom he will hear plead next January 25 in the trial for the Báez Sosa case.

Emiliano Javier Lazzari, meanwhile, has been part of the Tribunal since 2018, when he arrived to fill a vacancy that had opened.

His arrival was by decision of the Supreme Court of Justice of the province of Buenos Aires. Is that is part of the Corps of Magistrates of the Highest Court Buenos Aires, which is used to cover places that are free due to the absence of the titular judges in any judicial instance, as stated N/A.

Defender of Los Horneros at the trial for the crime of Báez Sosa: Fernando Burlando and the courts of Dolores

It is likely that the three magistrates will call a hearing on January 31. For that day, or at most a few days later, it is stipulated that They will already have the sentence prepared with the sentences to each of the defendants, after analyzing a mass of evidence made up of videos, photos, audios and chats, in addition to documentaries such as expert opinions and the autopsy produced during the investigation of the case.

Between social pressure and the rationality of the Penal Code

The Báez Sosa case awoke from the outset a strong social sensitivity due to its characteristics. The story was told of an 18-year-old boy who traveled to the coast for the first time with his friends and in the interim was approached by a group of rugby players who they beat him at close range, without saying a word or force and with the aim of killing himaccording to the narrative that both the lawyer Burlando and most of the media have chosen to tell.

from that logic strong pressure will be maintained for the defendants to be sentenced to life imprisonment, that they spend the rest of their lives in jail. And the three members of the Court are the recipients of that pressure that should mean nothing in the judicial terrain traversed by rationality.

In that line, There are legal experts who hold a different theory to the perpetualdemanded by Burlando.

The solidarity mission of the parents of Fernando Báez Sosa: they donated the collection for the anniversary of the crime

One of them is the criminal lawyer John Paul Fioribello. “Those detained for the crime of Fernando Báez Sosa have a different criminal responsibility, and the sentences they will receive are different. I understand that they have committed a crime that in my opinion would be a simple homicide, with penalties of 8 to 25 years in prison, one of the toughest in the Penal Code. In my opinion, the aggravating factors would not be accredited, which would imply a life sentence. I do not believe that the Court will incline with the elements that are gathered to a sentence of that style“, he told PROFILE.

In turn, the lawyer maintained that although “on the street some want revenge, what must be given here is Justice and I think it will find it in simple homicide.” Still, he questioned the “lack of repentance” and the defense’s strategy of going after those who performed CPR on the victim. “All that I think that it will also merit and that these boys have to serve a very harsh sentencebut not get into revenge,” he added.

For his part, the lawyer Marcelo Parrilli it also rules out a possible life sentence. In a dialogue with this medium, he maintained that “in the worst case, for the defendants, with some effort subsume his conduct in the simple homicide (8 to 25 years in prison)”.

However, use: “In all cases, because they are primary, that is, people with no previousit is not probable that the sentences will approach the maximum of the figures detected“.

From the Nora Dalmasso case to Fernando Báez Sosa: who is Juan José Fenoglio, the expert who strengthened the rugbiers’ defense

“Neither the legacy of treachery in the aggression nor the premeditated competition of two or more people has been proven. Here it should be noted that the only aggravating circumstance that could place the 8 defendants on the same level was the prior contest or agreement to kill, since it was not possible to prove that prior agreement, the 8 defendants cannot be placed on the same level.” , held .

And, before that, he added: “You have to go then to what each one did at the moment of the concrete event and there it is clear that some intervened beating Fernando Báez Sosa and others did not, it is clear then that noor may have, where appropriate, the same criminal liability”.

In turn, for Parrilli”it is not tested eitherand it should be emphasized that in this field the accusers must prove beyond all doubt, the alleged treacherythat it is safe to kill, since there is no clarity in the facts”.