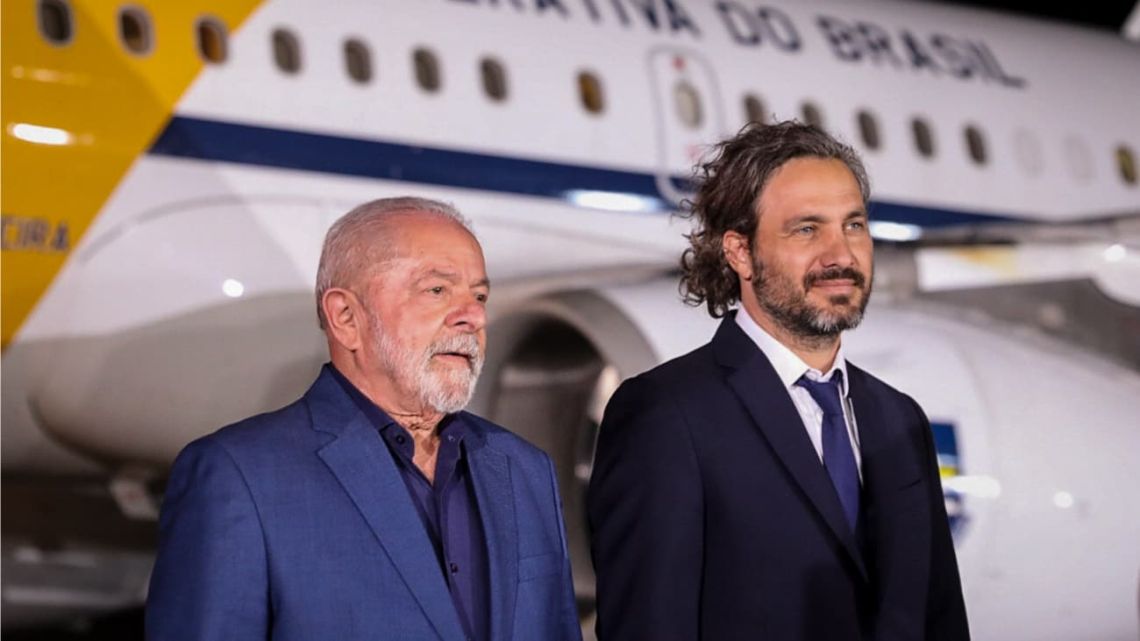 the president of brazil Luiz Inacio Lula Da Silva, arrived this Sunday night in Argentina on the presidential plane of his country, which landed at the Military Aerostation of the Ezeiza International Airport. On his agenda, the reunions with Alberto Fernández and Cristina Kirchner stand out, as well as the summit of the CELAC.

Lula, dressed in a blue suit and accompanied by his wife, Rosangela “Janja”was received shortly after 9:00 p.m. by the Argentine foreign minister, santiago cafieroand the fanfare of the Grenadier Regiment on Horseback.

“Good evening, from Buenos Aires. Tomorrow will be a Monday of intense work to resume the partnership between Brazil and Argentina. One of the main markets for Brazilian industrial products, Brazil’s third largest trade partner. See you tomorrow!” Lula said in Twitter.

Your schedule will be full, focused on roads meetings with President Alberto Fernández and Vice President Cristina Kirchneras confirmed to the agency telam Executive and Legislative sources.

The other high point will be the return of Brazil to the celacthat he had abandoned by decision of the previous president, Jair Bolsonaro.

In what will be his first official visit to the country since his return to the Planalto Palace, Lula will begin his activities this Monday at 10:30 a.m. with the traditional floral offering to the monument to José de San Martínin the homonymous square located in the Retiro area, to later move to the pink Housewhere one will be kept reunion with alberto fernández.

After the bilateral meeting, in the White Room, both leaders will lead the signing of agreements for cooperation in Energy Sovereignty and Financial Integration, Defense, Health, Science, Technology and Innovation, and Antarctic Cooperation.

Later, Fernández and Lula will make a statement to the press on the basic guidelines of the signed agreements and the joint declaration. It is expected that they delve into the details of the initiative of a “common south american currency“.

After sharing lunch with both delegations in the Eva Perón Room, at 3:00 p.m., both heads of state will participate in the opening of a Business Meeting at the Bicentennial Museumto later be part of an activity with representatives of different human rights organizations.

Lula and Alberto Fernandez write: Relaunching of the strategic alliance between Argentina and Brazil

According to the official schedule, from 7:00 p.m. the leaders will go to the Kirchner Cultural Center (CCK)where the Concert of the Argentine-Brazilian Brotherhood was held and the photographic exhibition: “Original Peoples- Warriors of Time” by Ricardo Stucker was inaugurated.

There will also be a meeting in the Senate with Cristina Kirchner, parliamentary sources confirmed to the agency telam.

“In addition to relaunching the strategic alliance, the bilateral relationship returns to its highest priority place for the two countries,” the Brazilian foreign minister said last week mauro scallop in an interview with the aforementioned agency, highlighting the place that Lula gives to his relationship with Argentina.

Meanwhile, on Tuesday, starting at 10, Fernández and Lula will participate together with the other heads of state, representatives and invited delegations of the VII Summit of Celac Presidentswhich will take place at the Sheraton Retiro hotel.

The meeting will convene the leaders, foreign ministers and representatives of the 33 countries members of the regional mechanism, as well as observers from various regional and multilateral organizations and their representatives.

The decision for Brazil to rejoin Celac was anticipated by Lula in the first days of his government and was formalized a week ago, after the Brazilian ambassador to Argentina, Reinaldo José de Almeida Salgado, delivered a formal letter to Cafiero , which constitutes a fundamental fact for the consolidation of the regional mechanism.

Lula launches his campaign to “remove Brazil from isolation”

The return of Brazil is also a key factor for another of the central objectives established for the VII summit from the Pro Tempore Presidency (PPT) of the bloc, currently in charge of Argentina: the search to give Celac a role more active “strengthening the economic, productive and social framework” of the region to achieve higher levels of “inclusion and development”.

The Argentine president has expressed his joy for the return of Brazil to that space and predicted that he now has the “certainty that we are going to be able to carry out the idea of ​​regional integration in the best way,” in statements to the China Central Television (CCTV).

There they also highlighted “the need to show a united Latin America before the world”, in addition to carrying out “regional claims” on the world stage.