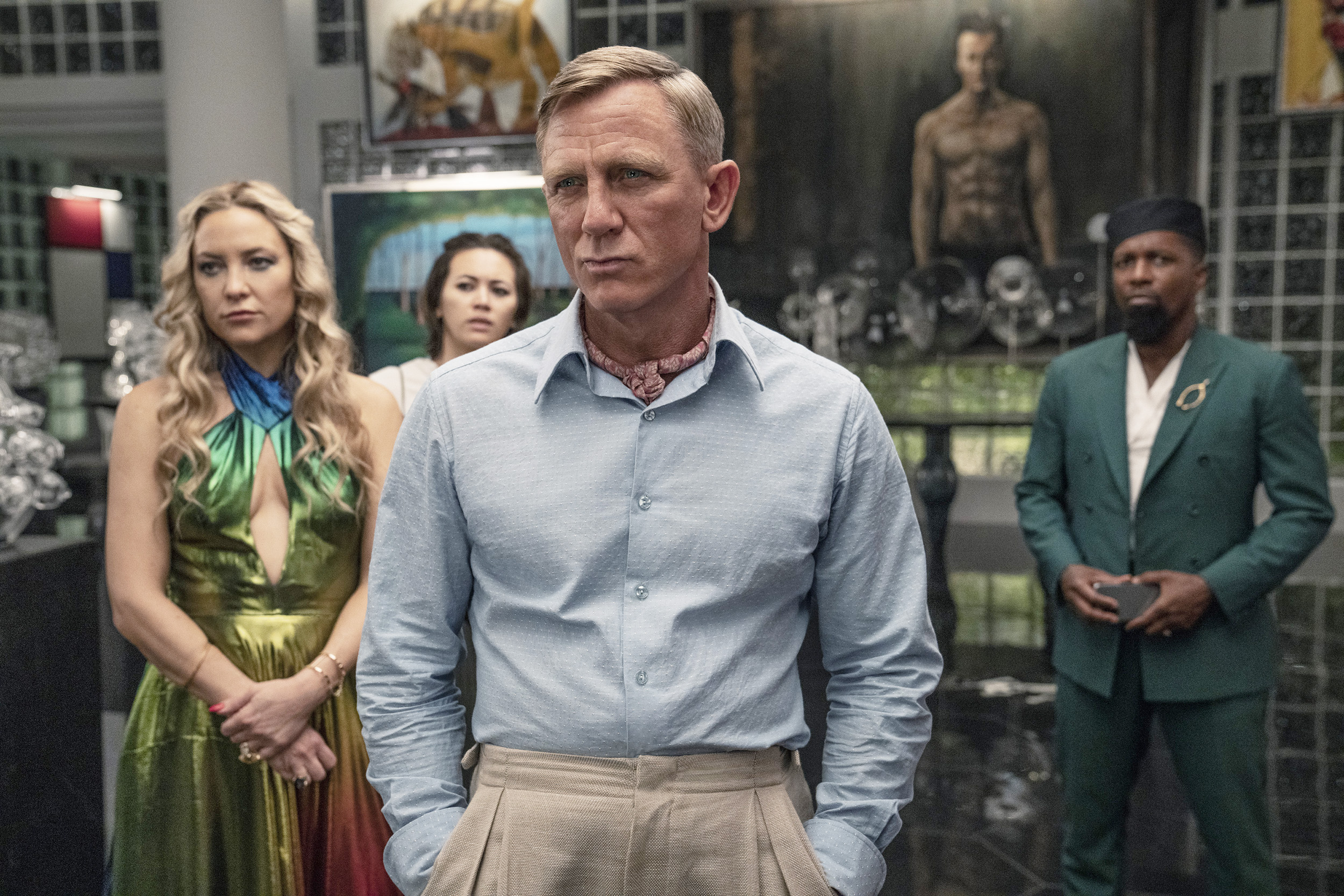 “Glass Onion: A Knives Out Mystery” is a bit of a clumsy title. But the film itself, calling itself only “Glass Onion” on screen, is a delicious trifle of a mystery film, a laugh-out-loud comedy that deserves to be a mass-market theatrical hit. Sadly, it won’t be, as Netflix will only play it for a week in theaters before pulling it to hit streaming by Christmas.

But perhaps “Glass Onion” is better experienced on stream, at least philosophically. After all, this is a movie about a group of terribly louche nouveau riche who break all the rules in the middle of a pandemic to play a murder mystery game on an island in the Aegean Sea. And its message, that billionaires are the dumbest among us, feels especially timely.

The original “Knives Out” was a brilliant reimagining of the 1920s “Manor House Mystery” made popular by Agatha Christie. Franchise creator Rian Johnson correctly recognized that the American 1% is the modern equivalent of the post-World War I aristocracy, and that setting up murders within their estates reflected Christie’s own era. The southern-accented Benoit Blanc (Daniel Craig) is Johnson’s modern-day Hercule Poirot, a fish-out-of-water among the elite who is seen by his quarry as an amusing sideshow. (Obviously, this backfires.)

The first film was very appropriately set on an English-style New England estate, where the family despised Blanc’s accent while underestimating him. The follow-up is less of a twisted whodunit and more of a broader comedy, but Johnson once again takes aim at the super-rich. This time we’re skewering Silicon Valley moguls, with Edward Norton as tech billionaire Miles Bron. He invites “old friends,” most of whom have woken up clinging to his coattails, to a Greek island with the intention of spending the weekend playing a murder mystery game based on Christie’s tales. .

Johnson begins the story in late May 2020, with characters miserably locked up. Aspiring senator Claire Debella (Kathryn Hahn) is doing TV interviews dressed only from the waist up. Duke Cody (Dave Bautista) is a YouTuber fighting for MRA clicks; Birdie Jay (Kate Hudson), a celebrity who has just made it big with her new line of sweatpants, partying at her Upper West Side apartment with her group of over 500 people, which somehow includes Yo-Yo Ma. And they’re all too happy to hide out and party on an island with Miles while the rest of the world suffers.

These characters are not good people. Except, of course, our hero, Blanc, who is also summoned to attend the party. At first, it seems that Bron has decided to up the ante by having a real-life detective in his game. However, when it turns out that the detective was secretly invited by someone else, things start to get interesting. And Blanc reveals that a real crime is afoot.

Revealing the killer in the middle of the party would spoil the fun, but unlike the original, this sequel is less focused on uncovering the clues. Not that the case Blanc is trying to solve doesn’t matter. But as the layers of this glass onion peel away and the scenes are repeated multiple times from different points of view of the characters, the story becomes less about getting justice and more about the stupidity of its supposed “genius” protagonists. Bron is both a white man who stole the hard work of his black partner, Andi (Janelle Monae), and passed it off as his own, and the kind of jerk who regularly uses the wrong five-dollar word in sentences in desperation. because it sounds smart.

Unlike the original, this sequel focuses less on uncovering the clues.

Johnson doesn’t skimp on enablers, either, like Lionel (Leslie Odom Jr.), the scientist whose job it is to approve whatever nonsense Bron throws his way. There are points where one almost wants to feel sorry for how miserable these lackeys are after selling their souls. But then everyone returns to declare how pretty the emperor’s robes are today, and that sympathy vanishes in a puff of island steam. Even hard-working employees, like Birdie’s assistant Peg (Jessica Henwick), are ultimately only looking out for their own interests. Johnson seems intent on leaving us with very few people to root for.

But with few heroes, Johnson puts that giant Netflix budget to good use, rounding out the cast with hilarious and sometimes bizarre cameos. (This movie happens to be the last screen appearance for Stephen Sondheim and Angela Lansbury, who end their careers as random footnotes on a Zoom call.) Joseph Gordon-Levitt also has a cameo, but it’s so subtle you might miss it. . At least there’s hope that Hugh Grant, who appears in a 30-second ad covered in flour and mixing sour dough, gets more screen time in the next film.

That said, “Glass Onion” is just as wonderfully enjoyable as its predecessor, though there’s little need to connect the two. (Why not rename them “Benoit Blanc Mysteries”, Netflix? Perhaps too simple a solution.) You will almost certainly enjoy it in small. And there you also have the pause button at your disposal in case of missed tracks. However, no matter how you look at it, Johnson’s commentary on the ultra-rich remains as sharp as ever.

Ani Bundel is a cultural critic who has been writing regularly since 2010. Her work can also be found on WETA’s Elite Daily and Telly Visions, where she also co-hosts “Telly Visions: The Podcast.”