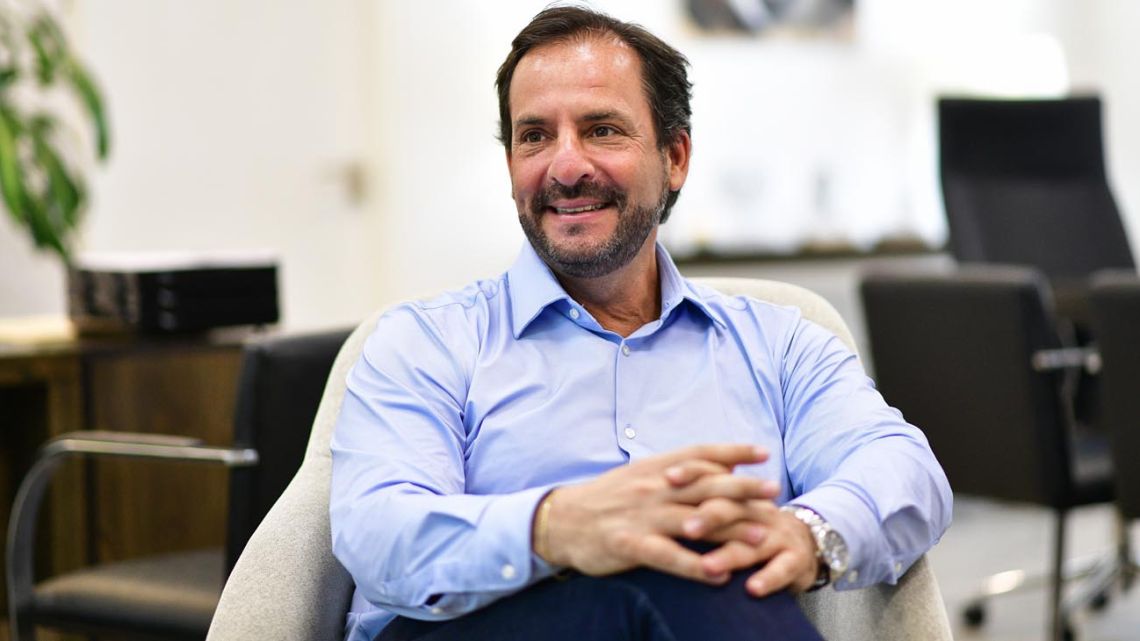 Today, the Knowledge Economy is the Third exporting sector of Argentina and only in 2022 closed external sales for 7,300 million dollarsWhile that number is expected to climb to 9 billion this year.

what’s moreemploys 500 thousand people directly and is emerging as the “future”. Because, beyond the idea that everyone has of the activity, how much less does it sound like “what’s coming”. It has that imprint of a ‘potential’ sector, as it has not yet reached the place it will surely reach. Y Ariel SukharchukSecretary of Knowledge Economy, shares the vision when he places it as “a look that must be taken on the future of the evolution of the system of new generation of projectspcontent-based industry and processes globally, In addition to the evolution of technology, software and the advancement of 5G (which Argentina will soon put out to tender), this sector has a growth projection of at least 10 years ahead“.

Hello and goodbye to 5G? Scientists are already working on the implementation of 6G

Now, what is the Knowledge Economy? It is not one, but many economic activities that require a very strong contribution from the knowledge human being to generate value and offer society new products and services, which can be used by all branches of production. Among the sectors that make it up are education, research and development, high technology, information technology, telecommunications, robotics, and even nanotechnology and the aerospace industry. It is precisely in the nanotechnology segment that Sujarchuk believes that there will be a qualitative leap in Argentina in the next ten years.

“With the new Bio and Nanotechnology law, a path begins to open up where I am sure that in 10 or 15 years we will be talking about this phenomenon like the one that the Software Law will continue 20 years ago”, he assured and added. “There what we are going to have a lot of import substitution”.

The Secretary of the Knowledge Economy of the Nation spoke with PROFILE about the projects in which they will put all their energy this year, and with great expectations he confided that he expects “the state software company to be active in the first four-month period of the year”:

Pillar and engine of the economy

– The Knowledge Economy is one of the pillars of the economy. What is the diagnosis?

– Argentina is the main producer of Latin American software and together with Colombia they are the most important players in the region. The activity closes 2022 with a record of exports, u$s 7.3 billion dollars, In other words, in all of its history, the country has never exported so many services in the Knowledge Economy and we plan for growth of more than 9 billion dollars by 2023.

– How much does the activity contribute in terms of foreign exchange?

The interesting thing is whate It is an activity that generates many dollars and practically does not have large export costs in any of its aspects, be it software, audiovisual, bio and nanotechnology, video games or gamers. That is to say that, in all the edges, it is much more what it generates and what is important is residual. For example, now, with the new law on Bio and Nanotechnology, a path is beginning to open up where I am sure that in 10 or 15 years we will be talking about this phenomenon like the one that the Software Law ended 20 years ago.

A great opportunity for growth

– What are the changes that the development of this area of ​​bio and nanotechnology can bring?

We are going to have a lot of import substitution. In fact, this week a company began to generate PCR kits for the different influenza and covid tests. It stops importing for 12 million dollars and is going to export for 15 million, with which only in that action there is a 27 million dollar difference.

– Beyond this specific example, is there data on how much can be substituted in imports in that area?

The road is enormous because the new law generates competitive advantages such as 1-year capital amortization, a return of profit practically in half, and a 70% return of employer contributions, which puts it in a competitive sector, added to something that has Argentina and that is valued throughout the world as the quantity and quality of scientists to generate this kind of process. In fact, it participated in different vaccine processes during the covid, it is one of the few countries that produce satellites and has satellites in the air. There is an elite place of knowledge that we have to generate as a state policy process for the future.

What does a front end developer do: he can earn up to US$10,000 but there is a lack of professionals

– What is the sector’s place compared to other economic engines in Argentina such as agriculture?

It is the third exporter, after agriculture and auto parts. In addition, since Sergio Massa took office in Economy, he began to adopt some measures that stimulate new exports or generate dollars. And just as it released export duties to auto parts manufacturers that exported more than they had exported up to now, the same thing happened with the knowledge economy. He took out a DNU which is an export stimulus freeing up dollars.

Any increase in exports this year will have an advantage in terms of foreign exchange this year, as well as those that bring new business to Argentina, because the war in Eastern Europe brings many opportunities because many businesses that took place in that area They can come to our continent. We have to become very competitive, thinking not only that we have the talent but also the ideal time zone to export services to Europe and the US.

– How many people does the sector employ?

– One of the bottlenecks today is the flight of talents to work abroad… what is being done to curb the phenomenon?

First of all, it is good to clarify that it is not only an exchange rate gap issue, because today working abroad means sitting in the living room at home and opening a notebook and providing services, which means that the sector has a higher level of turnover than that of other sectors, even within the Argentine companies themselves. Because due to the very characteristics of professionals in the sector, no one sees themselves in the same workplace for 10 years. But regardless of that, it is a very important change in habit that does not respond exclusively to the issue of the exchange rate gap.

Being more clear, if the gap did not exist, this would happen the same. The gap may speed it up.

Regarding the gap, the economic team is working to reduce the exchange rate gap. What we are taking, unlike other sectors, are free dollars. Example: all companies that increase their exports will have 30% free currencies and all those that bring in new business will have 20% free dollars, which is cumulative with 30%.

It started operating in 2023. In 100 days we put together the DNU that we agreed with the sector, it was regulated through the BCRA and AFIP. We also updated the knowledge economy bonds and incorporated a very important item in the Budget that was produced this year.

– How is the relationship with companies in the sector?

It’s very good. We talk a lot. We work on long-term policies and resolve some short-term issues. And in fact it is so good that we are planning together with all the chambers presenting a consortium to organize the first Knowledge Economy event in March of this year.

What will the new national software company that the government wants to create be like?

– The government wants to create a national software company. What is the status of the initiative and how would it work?

The idea arose from one of the biggest challenges facing the sector not only in Argentina but in the world: talent retention, because they are profiles that are in high demand. Furthermore, every large company has its systems department and the State originally had it; but with this new situation that applies systems and processes to everything, it is necessary to build a suitable tool. Therefore, generating a state company will guarantee the retention of personnel; second, that the people who are being trained can come to offer services to the State; Thirdly, we are going to guarantee that the State’s sensitive data remains inside; and fourthly, we are going to lower costs, as long as the company is going to provide the service at the same or lower cost than the private ones.

In general, it is an initiative that is highly regarded by all as it has the particularity that it is designed without a start-up budget because the idea is that the State agencies that require it hire it for projects and thus be self-financing. We are in the final stage of preparing the project. I would like it to be available in the first quarter of 2023.

– What are the projects you are working on in the knowledge economy area?

At the Secretariat we started 2023 with several projects.

1) 1,2,3 which is the strengthening at the federal level of the cluster to develop poles of knowledge economy.

2) We are about to launch a project for the audiovisual sector (Film Art) which is the return of a percentage of the cost of audiovisual production to increase that industry in the country.

3) There will be a new call for videogames: to support startups that need funding to go from project to prototype.

5) We are implementing bio and nano technology projects. Argentina is 15th worldwide in this sector.

9) We send for your treatment in extraordinary sessions the project to create a technological monotribute and also for other talents.

– How would it work?

We have no knowledge of reality. People do not stop working, but instead look for informal mechanisms to collect their fees and not lose profits. The State has to provide a tool so that a person can work abroad, invoice their services, and that they do not have to charge in black. It is necessary to regularize this situation for the liberal professions, and make it compatible with the traditional monotributo. It is for technological profiles and for talents as well. It is a tool to be able to bill and have dollars deposited in your account. In this way, the free dollars would enter and for monotributistas it would not necessarily pay the social work and retirement component that is already being paid in the traditional monotributo. The ceiling is to bill these 30 thousand dollars a year. What we are not going to allow is that this tool be used to make “bills” abroad.

– What challenge do you pose?

My challenges are to give it the necessary visibility so that Argentines realize that, just as meat, cereals, wine and soccer are part of international recognition, this sector must also be a strength worldwide. Argentina can be a very strong pole in Latin America in the knowledge economy. For that, people have to empower themselves and here the March event is the first big step. As well as putting together the country brand so that all Argentine embassies also promote the sale of services in the sector.

In addition, I would like it to be a State initiative. We need to jointly define that this sector is strategic for the country, because in essence it has all the advantages: it generates dollars, it generates employment, it has federal inclusion and it puts Argentina in an extremely interesting place to revalue its resources, because the best that we have is our people.