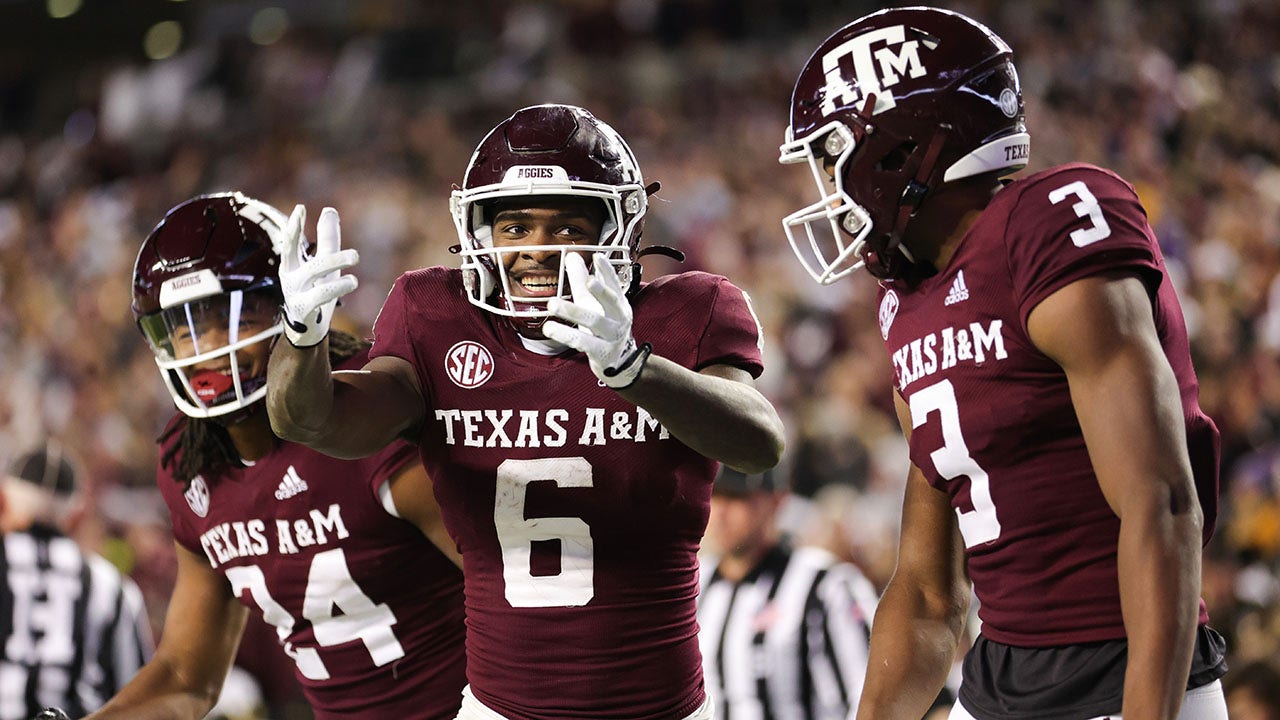 Devon Achane had a career-high 215 rushing yards with two touchdowns as Texas A&M stunned No. 5 LSU 38-23 on Saturday night, knocking the Tigers out of contention for the football playoff. college american.

Conner Weigman threw two touchdown passes for the Aggies (5-7, 2-6 Southeastern Conference) and Demani Richardson returned a fumble for a score. The game was tied at 17 going into the third quarter before A&M scored 21 straight points.

LSU (9-3, 6-2, No. 5 CFP) had already clinched a spot in next week’s SEC title game against unbeaten No. 1 Georgia, and a win there could have put the Tigers in the playoffs. But with three losses, even beating the Bulldogs probably won’t be enough.

Devon Achane #6 celebrates his rushing touchdown with Devin Price #3 and Max Johnson #14 of the Texas A&M Aggies against the LSU Tigers during the second half at Kyle Field on November 26, 2022 in College Station, Texas.
(Carmen Mandato/Getty Images=)

But Edgerrin Cooper hit Jayden Daniels and forced him to fumble on LSU’s ensuing drive. Richardson picked it up and ran 37 yards for his second touchdown this season to put A&M on top 24-17 with about seven minutes remaining in the third quarter.

The Aggies extended the lead to 31-17 on the first play of the fourth quarter when Moose Muhammad hauled in a 21-yard one-handed touchdown run.

A 10-yard run by Achane, who returned after missing two games with a foot injury, made it 38-17 with about eight minutes to go.

A rowdy crowd of over 93,000 fans packed Kyle Field with some beginning to run onto the field with about 17 seconds remaining, causing a delay. It was a big difference from last week, when most of the crowd emptied out after halftime on a cold, wet day.

Those fans and several thousand more poured onto the field as time expired.

Daniels passed for 189 yards and rushed for 84 more and Emery had three touchdowns for the Tigers, who lost their first game since a 40-13 loss at home to Tennessee on Oct. 8.

Donovan Green #18 celebrates his touchdown with Evan Stewart #1, Noah Thomas #9 and Kam Dewberry #75 of the Texas A&M Aggies during the first half against the LSU Tigers at Kyle Field on November 26, 2022 in College Station, Texas.
(Carmen Mandato/Getty Images)

Daniels nearly connected with Jaray Jenkins in the end zone on fourth down on LSU’s next possession, but Tyreek Chappell knocked the ball out of Jenkins’ hands. Then the Aggies ran out of time.

Achane put A&M ahead early with a 10-yard TD run on the team’s first possession.

Emery tied it with a 4-yard run early in the second quarter.

The teams traded field goals, and the Aggies regained the lead when Weigman threw under heavy pressure and connected with Donovan Green on a 3-yard touchdown drive about a minute before halftime. Achane had runs of 29 and 17 yards on that drive.

LSU: With their playoff chances slim to none, coach Brian Kelly’s Tigers will have to put this behind them quickly if they hope to compete with the Bulldogs.

Texas A&M: The Aggies have shown that they have plenty of talent to compete with teams at the top of the SEC. The question is why coach Jimbo Fisher’s team couldn’t put him together earlier in the year. The Aggies hadn’t won an SEC game since beating Arkansas on September 24.

LSU: Play Georgia in the SEC championship game next Saturday.

Texas A&M: Will try to get through this disappointing season.