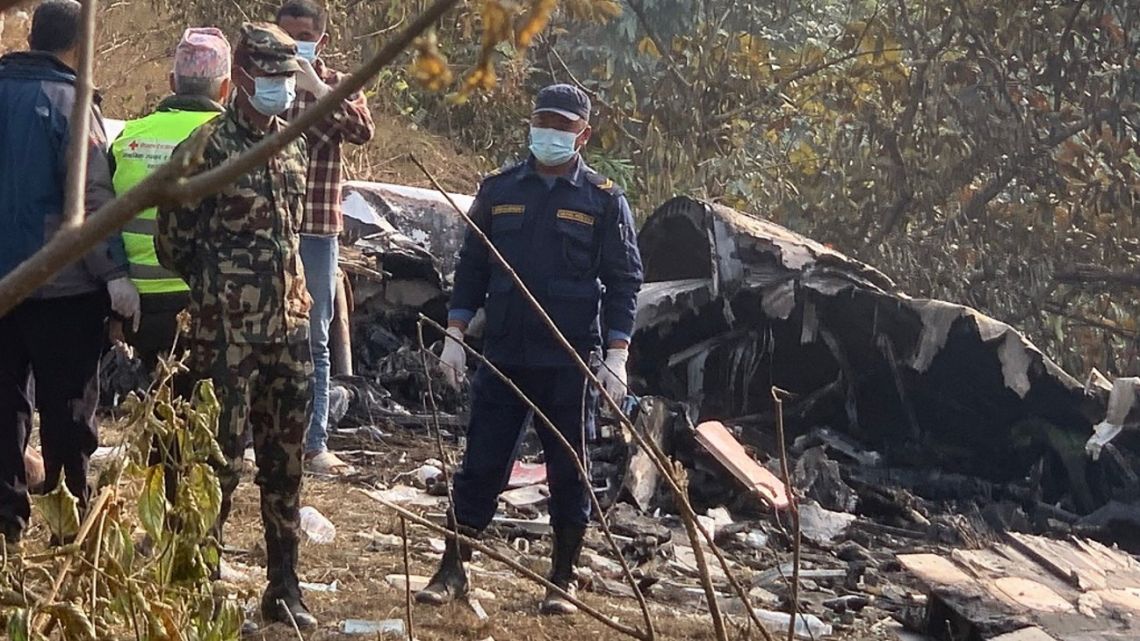 At least 67 people died this Sunday in Nepal when a Yeti Airlines plane crashed in which 72 people were travelingand in the machine an Argentine citizen was traveling, although his identity is not yet known.

“We have already brought 31 bodies,” police chief AK Chhetri told AFP, adding that another 36 bodies still remain to be recovered from the ravine where the plane crashed on Sunday. The flight came from Kathmandu, the Nepalese capital, and crashed shortly before eleven in the morning local time (05:15 GMT) near the city of Pokhara, in the center of the country, where it should land. This city is an important crossing point for foreign pilgrims and mountaineers.

There were 68 passengers on the flight, one of them Argentine, and four crew members., according to the guarantee of the airline Yeti Airlines. There were 14 other foreigners on board: five citizens of India, four Russians, two Koreans, one Australian, one Irish and one French, The airline’s spokesman, Sudarshan Bardaula, said.

The burned-out fuselage of the device was found men a deep ravine between the old Pokhara airport, created in 1958, and the new international terminal of this city, inaugurated on January 1st.

“The plane crashed in a ravine, so it is difficult to remove the bodies. The search and rescue operation continues. So far no survivors have been found,” An army spokesman, Krishna Prasad Bhandari, told AFP. A local official initially said “some” survivors were taken to hospital, but this was not confirmed by Yeti Airlines or other sources.

Pokhara is an important crossing point for foreign pilgrims and mountaineers.

After the accident, rescuers tried to put out the fire among the remains of the device, an ATR 72 powered by two turboprop engines. In a video shared on social networks, he could see dozens of people around a huge fire, which gave off thick black smoke at the bottom of a ravine. Some tried to put out the flames by throwing water.

A history of plane crashes

Nepal’s aviation industry has grown a lot in recent years, both in the transport of goods and tourists. However, due to lack of staff training and maintenance issues, escorts often suffer from security issues. The European Union therefore prohibited all Nepalese carriers from entering its airspace.

The Himalayan country boasts some of the most remote and challenging tracks in the world, flanked by snow-capped peaks that make approaching them challenging even for experienced pilots.. The companies indicate that Nepal does not have the infrastructure to establish accurate weather forecasts, particularly in the most remote regions and with difficult mountainous relief, where fatal accidents have been recorded in recent years.

In May 2022, the 22 people who traveled aboard a plane of the Nepalese company Tara Air -16 Nepalese, four Indians and two Germans- died when the device crashed. Air control lost contact with the twin-prop aircraft shortly after it took off from Pokhara en route to Jomsom, a popular trekking spot.

His remains were found a day later on the side of a mountain at an altitude of about 4,400 meters. In March 2018, 51 people died in the crash of a US-Bangla Airlines plane that crashed near the Kathmandu International Airport, in a notoriously difficult situation. That accident was the deadliest in Nepal since 1992, when all 167 people on board a Pakistan International Airlines plane crashed near Kathmandu. Two months earlier, a Thai Airways plane crashed near the same airport, killing 113 people.